A rarely seen Farrow masterwork:  a dark Faustian melodrama about politics, power and corruption, with Ray Milland and Thomas Mitchell in one of his best-ever screen performances as an aspiring politician who gives in too readily to corruption.  The much under-valued character actress, Audrey Totter, is compelling as a woman far more principled than the men around her.  Filmed in flawless noir style – dark shadows, foggy streets and dockside locations at night – and with a brooding score by Franz Waxman, the screenplay by frequent Farrow collaborator, Johnathan Latimer, is “a model of precision and construction … (with) the overall power of the suggestion of some all-pervasive satanic evil … An undeservedly neglected film which should rank high on the list of Farrow’s best” (Chris Wicking, Time Out, London) 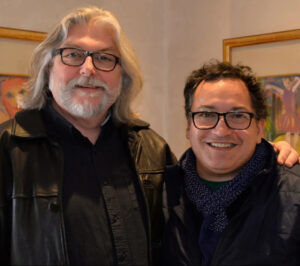 Director/Producer: Frans Vandenburg (ASE) has extensive post-production and editing credits over some decades. Ranging from crafting performances by Jack Thompson, Nicole Kidman, Russell Crowe, Cate Blanchett, Hugo Weaving, Judy Davis, Heath Ledger, and Raul Julia in iconic Australian and American films including Newsfront, My Brilliant Career, Blackrock, Romero to The Sum of Us; for which he was nominated for the AFI award for Best Editing; to documentary and television credits including Bangkok Hilton, Nick Cave and the Bad Seeds: Murder Ballads and Sydney at War. He also has extensive experience in the restoration of classic movies and archival film research.

Director/Producer: Claude Gonzalez is an award-winning director and producer who has worked in film and TV for many years – directing and producing documentaries, series, and commercials. Recent highlights include director of the series Meet the Mavericks, for which he was nominated for an AACTA Award for Best Direction, and Series Producer of Australia’s iconic film review series At the Movies. Claude is the director of the documentary Sydney at War, nominated for an IF award for Best Direction, and the Producer of the AACTA-winning documentary Global Haywire.